For those of you who wondered what eRosita data is like, you can now take a look! MPE, ourselves and other core institutes of the German consortium have prepared press-releases to celebrate this major milestone.

The early data release (EDR) contains almost 100 individual observations of 29 distinct fields taken before the start of the all-sky scans. They cover a wide range of different astronomical objects, from galactic neutron stars to clusters of galaxies (see figure below) and showcase the potential and versatility of the eROSITA telescope for imaging, spectroscopy and time domain analysis. Arguably the most interesting part of the released data is the final equatorial depth survey (eFEDS) which covers over 140 square degrees of the sky to depth of $\sim10^{-14}$ erg/cm$^2$/s comparable to final sensitivity which eRosita will achieve over equatorial areas in the ongoing all-sky survey. 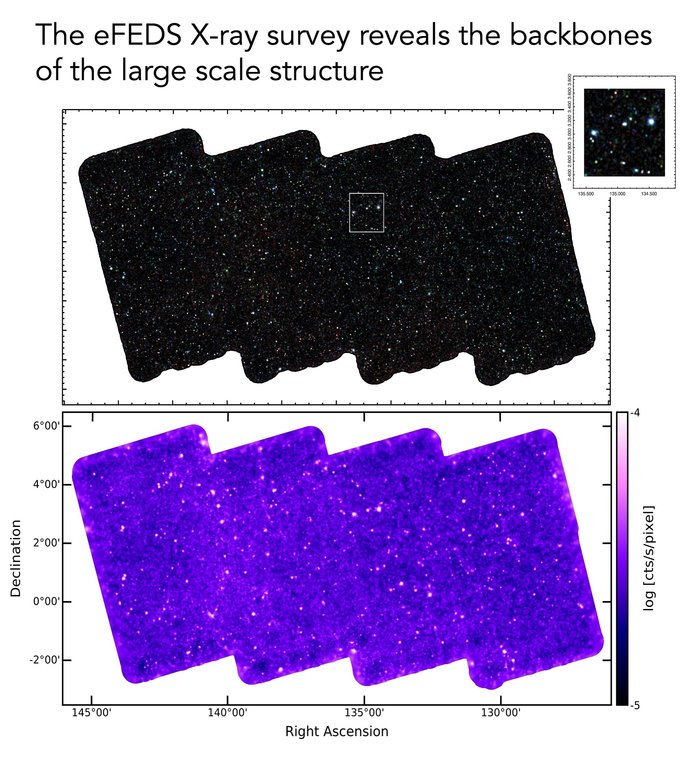 The image above gives a glimpse on this dataset. The top panel shows all sources, color-coded by the energy of the photons. The inset is a zoom onto a "supercluster", i.e. a conglomeration of clusters of galaxies about to merge. In bottom panel, all stars and AGN (i.e. all the point sources) have been filtered out from the eFEDS X-ray image. What is left is the diffuse emission from clusters and groups of galaxies, the matter in between, and the halo of the MilkyWay in front. As such, it gives a visual illustration of the large-scale structure that is almost impossible to gain otherwise.

More details are available at MPE website and of course in the papers describing science we were able to do with the released data already and now making a splash on arxiv!