Explosion on a White Dwarf Observed

Sometimes Nature just throws it to your face! When the event was detected by eRosita near time analysis team, everyone was rather surprised by the mere appearance of it. It did not take long to associate what we saw with the flurry of ATELs reporting the flash of YZ Reticuli. Which was big, because it was clear that we observed the ignition flash of a novae, something which was (unsuccessfully) searched for more than thirty years! Which made the work to make it to the nature cover! 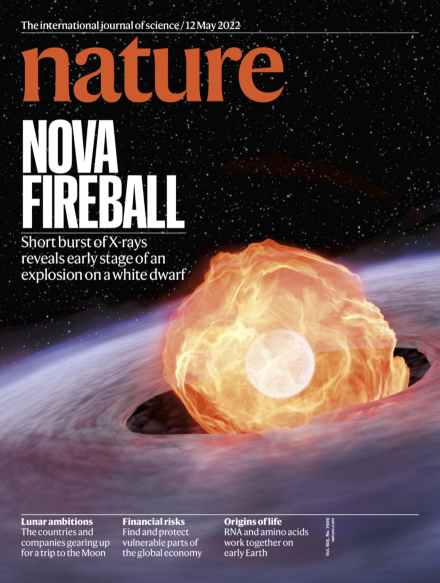 A very lucky coincidence taking into the account the comparatively narrow field of view of eRosita and the fact that the flash is such a short event (hours). Indeed, evein if eRosita is an all sky survey, instantaneous field of view is just shy of two moons in diameter, and given point on the sky is scanned only twice a year, but this time it was in the right place at the right time!

Of course, detection was just a beginning of the very complex work led by Ole König from FAU, which allowed us not only to recover the time and place of event, but also the decently constraining X-ray spectrum from the extremely piled-up data. The phenomenon of "pile-up" occurs in X-ray CCD detectors when the source is too bright and more than one photon hits given pixel between the readout cycles, so while we still know the total energy received, we loose track of the number of photons carrying it and thus can not recover their energy distribution. The only thing is - we now can! Ole modeled the response of the instrument to extremely bright source taking this effect into the account, which allowed to recover the true spectrum of the source, and measure its temperature (327000K), luminosity (52000 times the Sun!) and radius of 50000 km for the white dwarf. This implies that eRosita has indeed detected the "naked" photosphere just after the released energy reached its surface and before the main expansion of the envelope, i.e. a Nova in fireball phase. The results are published in Nature today. The full press releases from Uni Tübingen and FAU, as well as journalist's take on the paper from Sky&Telescope and inverse.com are also in place :)